Founder of studio facta, he is a designer by calling and because he likes to discover ideas for tomorrow.

He started his career as a junior designer in 1986 in Raymond Loewy’s team, then worked in several agencies as senior designer before setting up his own studio in 1999. 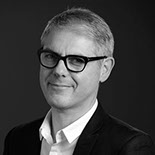